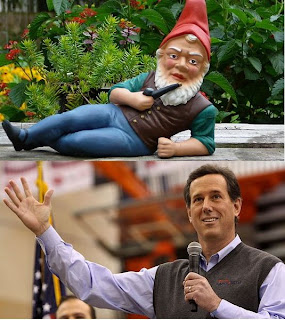 Breaking News April 1, 2012
According to his website, Rick Santorum believes that
·         Education is the responsibility of the consumer, the parent.
I agree wholeheartedly!  Were I able to afford them I would consume as many educations as I could fit in the trunk of my 1998 Toyota Corolla - and I'd buy a few for my wife and kids!  Goes great with ketchup and PBR.
·         Parents and citizenry should hold schools accountable and have educational options for their children.
I absolutely agree.  I mean, why can't schools get truants to achieve at the same level as students who attend every day?  If my kid had anger management issues because of the violence and alcoholism in my home I would be furious if they restricted his behavior just because it disrupts class.  I should be allowed to take my hard earned tax dollars and put him in the local alternative school so he can sing little songs and doodle all day!
·         Reforms at the local level should be focused on expanding consumer choice in public, private, and personalized education, and personalizing to the needs of individual students rather than governments or unions.
Speaking as a government worker and certified union boss I can tell you just how greedy they are.  I mean ten or twelve times a year I spend my Saturdays plotting with my fellow union bosses to ruin the lives of children and the union actually feeds me lunch!  How greedy is that?  And sometimes they feed me when I go to an evening meeting.  And not just sandwiches - I get a cookie and a soft drink too!
What's worse, sometimes we get a choice of sandwiches.  Why should we union bosses get to choose our sandwiches when parents don't even get to choose which lies their children are taught?
Vote for Rick Santorum in 2012!
Posted by Steve Owens at 1:05 PM