Cooking the Books: Healthcare and Education 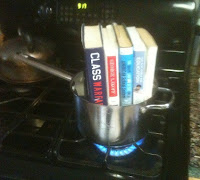 We count healthcare costs twice in policy discussions, once when talking about per capita health care costs and again when talking about any costs of government which have an employee health care component. A prime example is education funding: in calculations of per pupil spending there is a substantial component of healthcare costs for education workers and their dependents. By double dipping, and counting these costs once on the health care ledger, and again on the education ledger, we are inflating the costs of government and distorting the policy discussion.
This distortion plays into the radical right's push to "shrink government until it can be drown in the bathtub."  If we debate public policy on the basis of funny numbers, if we don't even acknowledge how the books have been cooked, we are not going to have decent outcomes.
How can we compare ourselves to countries like Finland, which pays for universal healthcare from a healthcare budget and universal education from an education budget?  Of course their per-pupil spending is going to be lower!  They don't use revenue raised for the purpose of educating children to pay for private health insurance for education workers and their dependents.  They don't use schools as a mechanism for keeping employees and their families healthy.  That makes so much sense.
As Pasi Sahlberg explains, you can't understand Finnish education outside of the context of their wraparound social democracy.  And a corollary must be that you can't understand American education and its successes and failures without taking into account our context.  This includes the growing momentum of the neo-liberal program which is systematically dismantling government and consigning public good to the for-profit sector.
There is another subtler distortion.  When you have a childhood poverty level approaching 25% (which no other advanced nation tolerates) the effectiveness of every dollar spent on education is diminished.  When children arrive at school suffering health, food, transportation, or housing insecurity, or when they arrive from families stressed by the threat of those things, they are not going to be as ready and able to learn.  Families under economic stress lack the capacity to effectively support children as learners.
A nation which heaps the inefficiencies of its own injustice onto its education system is going to have to pay a lot more for any type of educational outcome.  It doesn't mean that education has failed, just that we are asking unreasonable things.  You have to use the right tool on the right job.  You don't plow fields with a family sedan.  You don't cut boards with a hammer.  Yes, we need great public schools.  But we also need to provide those schools with comprehensive institutional supports so that children arrive ready to learn.
That would require acceptance of a concept of public good.  It would require us to accept that the health, education, transportation, nutrition and housing of individuals in our society is not just a matter of private interest to them, but also a matter of great public interest, because societal failure is the sum of vast numbers of personal tragedies.  JFK put it in positive terms: "A rising sea lifts all boats."
Posted by Steve Owens at 9:30 AM