A College Student Speaks Out 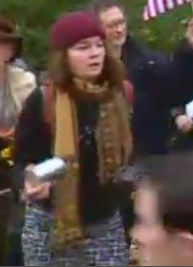 My daughter Liz Beatty-Owens gave this speech at a labor rally at Johnson State College in October.  Liz is 20, and is already a skilled organizer, with a deep understanding of the political and educational issues we face.  She and I work together when we can on behalf of the Vermont Workers Center.  Liz spent last weekend at Zuccotti Park in New York City participating in Occupy Wall Street (that's Liz serenading Mayor Bloomberg)
I am standing here today because- I am a student- half way done with my college career and I am already $20,000 in debt. And yes- in terms of debt I am one of the lucky ones.
I am here today because I am a student with a 15-credit work load, working 2 part time jobs, thousands of dollars in debt and I still cannot regularly afford to live comfortably - and I know I am not the only one.
I am here today because I have followed the rules.  I graduated from high school and I went to college - the path laid out for us by our society - yet it has not been made a sustainable path.
I can’t help but feel discouraged when each semester I have multiple peers drop out of college for financial reasons- going off to minimum wage jobs or, in two cases, the military, with semesters of debt looming behind them.
I don’t know about you but I want to live in an educated society where a college degree is not considered a privilege but recognized as a social good.
I have had the opportunity these last two semesters through numerous political science classes to speak to many of our Vermont political leaders and active community members. And more often than not the question is asked of me in this situation- why aren’t more young adults involved with politics- more active and driven in this field?
And as this question resonates with me I can’t help but turn to them and say: How can we expect the majority of students to support the government when students are not being looked out for by our government.  We are underfunded and consequently unsupported.  It’s a give and take deal.
That said, it has become clear to me this semester that the student population at Johnson is no longer willing to stand idly by.  We have groups forming such as Students for a Democratic Society (Wednesday nights at 7:00) and an ambitious group of students named Johnson to Wall Street (Tuesdays at 7:00).
And lastly, I would like to see the creation of a student union to represent our voice and our expectations at a state wide level- initially here at Johnson but then becoming VSC wide.  There is power in numbers- and we have the intelligence, the energy and the drive to create change right here, right now.
I would like to invite every Johnson student to sign up for the Student Union.  Our table is right over there….
With a unified voice we can stand up for students and create change at a localized level.
Let’s ask Vermont to once again set an example for the rest of the country- we’ve done it before with health care and same sex marriage- let’s do it again! Let’s support our students, fund our colleges and create social justice!
Posted by Steve Owens at 5:59 PM