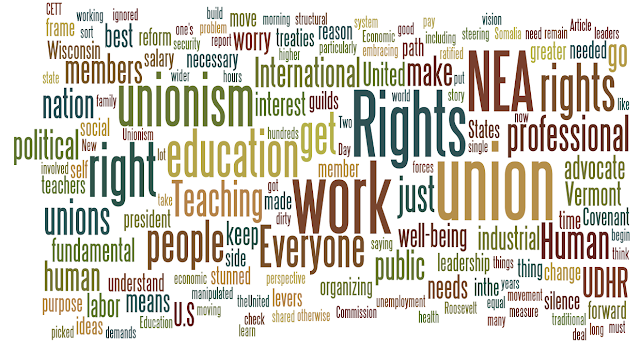 Wisconsin Rising tells the story of how Wisconsin became a testing ground for the nation in a political environment where corporations have greater and greater clout and ordinary citizens are losing their ability to obtain redress. At a time when millions of families are feeling the crush of debt and joblessness, and while large corporations are seeing record profits, Badger State residents are demonstrating the strength that comes from a shared sense of identity and pride, and that these bonds can shake even the most powerful political machines.

This film will be a testimony to the value of people rising up in the face of injustice and corporate greed. Burlington filmmaker needs your support now in order to get the film fully financed, and she needs less than $4,000 by Saturday to do it.  Click here to donate and learn more.
Posted by Steve Owens at 7:24 PM No comments:

Transforming Teaching….
This document makes radical demands.  One can go through it and nod one's head and say OK, the union needs to do this, check, and ED has to do that, no problem....OMG they want me to do WHAT?  That's where the stunned silence kicks in. It reads like a package deal.  True, the document can be "otherwise manipulated"  or cherry picked so as to leave the "OMG" out.  We're all reformers as long as its the other guy doing the reforming.
For example a board member on the negotiating team distrusts teachers' self evaluation.  She thinks we're very self serving.  PARS?  That would blow her mind - giving up control.  But she'd have no problem with the union giving up security in the ways suggested by "Transforming Teaching."
There is a worry that some folks are planning to take what the CETT has put forward and claim it as their own.  I'm not sure I see a problem here.  I get mentoring from time to time by a brilliant Marxist labor organizer who always reminds me that it is the cause that matters in organizing, not my individual ego.  This thing she taught me allows me to be a lot more effective.  So if one's ideas get stolen en masse and actually implemented, I'd count it as a success - as long as they are not too cherry picked or "otherwise manipulated."
The thing I worry about is that all this stunned silence will make this initiative go the way of Bob Chase's "New Unionism."  In a 1997 NEA Higher Education Journal interview, Chase said:
"New Unionism means being as strong an advocate for the professional side of the education equation as we have been for the economic and social well-being of our membership, the other side of the equation.
I’m not saying that we should, in any way, back away from the moral responsibilities as a union to provide for the economic well-being of our members. But I am saying that there is another whole area of our members’ well-being—the professional side—that we must be involved in.
If we take the best from traditional industrial unionism and the best from traditional craft unionism, as well as the best from organizational management gurus, and meld all these into a philosophical underpinning for what our union should be, I think that we would be stepping forward and moving in a direction that is absolutely essential if we are to remain relevant.
This means that those of us who have held beliefs that are more in line with traditional unionism must rethink some of that and broaden our scope and vision about the work of the NEA.
This is tough work, and there’s no blueprint for how we go about doing this. But unless we can make inroads here—whether it’s K-12 or higher education—our importance to the future of education will be minimal, and the needs of our members, or potential members, will go unmet."
That was 15 years ago.  The more things change the more things remain the same.  Well now there is a blueprint in a sense.  The big question is will it make any difference.  The reason I keep writing about “Transforming Teaching” (like a damn fool) and trying to keep it alive is my hope that educators will emerge from their stunned silence and start talking about this thing.
Posted by Steve Owens at 9:51 PM No comments:

Why I Embrace "Transforming Teaching"

Why Did I Create a Page for The Universal Declaration of Human Rights?


My friend, colleague, and fellow Teaching Ambassador  Elaine Romero posted her resolution on Facebook this morning:  “2012 is here! I am going to learn more about the Universal Declaration of Human Rights (UDHR) and tie them to my work. (They keep crossing my path)!”
They crossed my path, too.  On December 10, I wrote “How Things Have Changed in Two Years.”  The occasion was the Vermont Human Rights Day Conference.  The Universal Declaration of Human Rights was adopted on December 10, 1948. For this reason people throughout the world have chosen to celebrate this date as Human Rights Day.  There were several references at the conference to the UDHR.  I made a mental note to check it out someday.  This morning, thanks to Elaine, I did.  Doing so deepened my understanding and appreciation of the conference, and I resolve to begin framing issues with reference to this document.
Some highlights for me:
Article 23.
(1)    Everyone has the right to work, to free choice of employment, to just and favourable conditions of work and to protection against unemployment.
(2)    Everyone, without any discrimination, has the right to equal pay for equal work.
(3)    Everyone who works has the right to just and favourable remuneration ensuring for himself and his family an existence worthy of human dignity, and supplemented, if necessary, by other means of social protection.
(4)    Everyone has the right to form and to join trade unions for the protection of his interests.
Article 24.
Everyone has the right to rest and leisure, including reasonable limitation of working hours and periodic holidays with pay.
Don’t these go together well?  Article 23 (4) provides the mechanism for the realization of the vision – and is the reason this blog exists.  Since (and before) 1947 the United States has thrown up all manner of creative roadblocks to thwart workers’ rights “to form and to join trade unions.”  We’ve recently seen some new and clever iterations in Wisconsin, Ohio, Alabama, and other states.
Article 25.
(1)    Everyone has the right to a standard of living adequate for the health and well-being of himself and of his family, including food, clothing, housing and medical care and necessary social services, and the right to security in the event of unemployment, sickness, disability, widowhood, old age or other lack of livelihood in circumstances beyond his control.
Economic rights are addressed by Article 25.  A belief in “freedom from want”  drives us in the Health Care is a Human Right campaign, the effort to make Vermont the first state in the nation to adopt a single payer system for health care.
Article 26.
(1)    Everyone has the right to education. Education shall be free, at least in the elementary and fundamental stages. Elementary education shall be compulsory. Technical and professional education shall be made generally available and higher education shall be equally accessible to all on the basis of merit.
(2)    Education shall be directed to the full development of the human personality and to the strengthening of respect for human rights and fundamental freedoms. It shall promote understanding, tolerance and friendship among all nations, racial or religious groups, and shall further the activities of the United Nations for the maintenance of peace.
26(2) is particularly interesting with regard to the current wave of education reform (some say “deform”) in the United States.  It sets forth a broad vision for education and its purpose – a purpose that cannot be measured by tests, but only by the quality of action that is undertaken by a nation’s citizens.  Success in education can be measured by the degree a nation respects the human rights set forth in the UDHR.  How does the US measure up?
The UDHR was drafted in 1947 by the UN Commission on Human Rights chaired by Eleanor Roosevelt.  Two major treaties emerged, the "International Covenant on Civil and Political Rights" and the "International Covenant on Economic, Social and Cultural Rights."  Together with the UDHR these are considered the “International Bill of Rights.”
I wanted to find out how the US dealt with the “International Bill of Rights.”  I consulted the Franklin and Eleanor Roosevelt Institute's web site and discovered the following:
Evidently the United States appreciates political rights, especially when they can be used to bash opponents in propaganda contests - and we like it even better when those rights are toothless concerning American behavior.  Economic rights?  Not so much.  Somalia?  What sort of company is that for us to keep?
This to me is far more of an indictment of our education system and our nation than any test can measure.  If you don’t get the fundamental purpose of education right to begin with, if you make it exclusively about readin’ ritin’ and ‘rithmetic, about what sort of job you can get, about the suitability of graduates for employment, etc. you’ve lost your soul before leaving the gate.

A nation that fails to teach its people to care….has it taught them anything at all?
Posted by Steve Owens at 1:47 PM 1 comment: