Paul Toner, President of the Massachusetts Teachers Association and middle school social studies teacher in Cambridge, MA, tells the truth about Mitt Romney......
In the third presidential debate Mitt Romney proclaimed twice, “I love teachers!” As a middle school teacher in Massachusetts while he was governor and now president of the Massachusetts Teachers Association I can assure you that we never felt Romney’s “love.” Our former governor never once met with the MTA to find out our views on education issues. He listened to business leaders and ideologues, not to classroom teachers, support staff or public higher education faculty and staff. 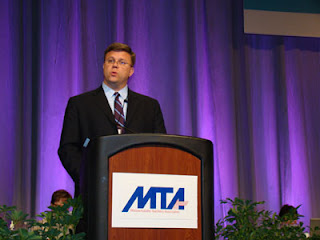 We roll our eyes when Romney tries to take credit for our high-performing students. Massachusetts is a relatively affluent state that has always had good schools. Those schools were made even better as a result of a major education overhaul and increased funding for low-income districts adopted in 1993, 10 years before Romney took office. No major education initiatives were enacted while he was governor. In fact, Massachusetts cut funding for public schools by a higher percentage than any other state during his tenure.
Romney’s boast that top-scoring students can attend any public college or university in Massachusetts “tuition-free” as a result of the John and Abigail Adams Scholarship he sponsored also elicits groans from educators, parents and students alike. In Massachusetts, our public higher education campuses charge very low tuition and very high fees, so the break these students get is way less than meets the eye. For example, this year tuition, fees, room and board at the University of Massachusetts comes to $23,436. Of that, only $1,714 is tuition, so the Adams Scholarship winner still has to pay $21,722 to attend. In addition, fees rose by $3,000 under Romney, more than swallowing up any small benefit from the scholarship.
Romney was a frequent critic of those of us who call for smaller class sizes. He claimed that there is no correlation between class size and student performance even while he sent his own sons to the Belmont Hill School – an exclusive prep school that costs $37,000 a year and that touts “class size averaging 12 students per section” as one of its selling points. Truly, Mitt Romney is out of touch with the needs of low- and middle-income students.
Mitt Romney has never liked unions. He especially dislikes teacher unions. While governor, he once told The Boston Globe, “We should put together all the stakeholders at the table, but not the unions. Individual teachers, yes, but not the unions.” It’s no surprise that today he believes that teacher unions should be barred from making political contributions. Not oil companies. Not tobacco companies. Just teachers and other educators.
As with so much in this election, it’s important to get information from people close to the source to cut through the spin. This much we know. Mitt Romney is going to lose by a landslide in Massachusetts, the state where he served as governor until he got Potomac fever mid-way through his term and started roaming the countryside bad-mouthing our state and bad-mouthing teachers’ unions, even while proclaiming his “love” for teachers. Whatever he’s selling now, we’re not buying it. Take it from those of us who know.
Posted by Steve Owens at 6:41 PM No comments: